In November 2013, I sat down at my tiny Ikea desk, opened up my big school laptop, and embarked on a journey that would change my life for the next four years: I started writing my first solo novel at the age of ten. in fifth year. The project spanned several drafts and hundreds of pages before finally running out of steam near the end of my eighth year, nearly four years later — a third unfinished draft of over 200 pages in Google Docs.

What began as a month-long endeavor for National Novel Writers Month, affectionately dubbed NaNoWriMo by the writers around the world who participate each November and rush to complete a fifty-thousand-word project in thirty days, has grown into a passion project in its own right that I devoted my free time too. I lay up late at night in bed, my laptop perched on a pillow in my lap. I bought a notebook—several, in fact—and doodled in it during class, jotting down ideas or rough sketches of scenes that I would later type on my computer. I roped my friends into it, and together we sat on my bedroom floor above a giant poster board, mapping out plot points and character arcs.

And even though I never finished the book, and there’s no way this draft will see the light of day, I can’t say that I regret the time I spent on it, or that it was a waste of time. Here’s why.

I found an introduction to the world of writing 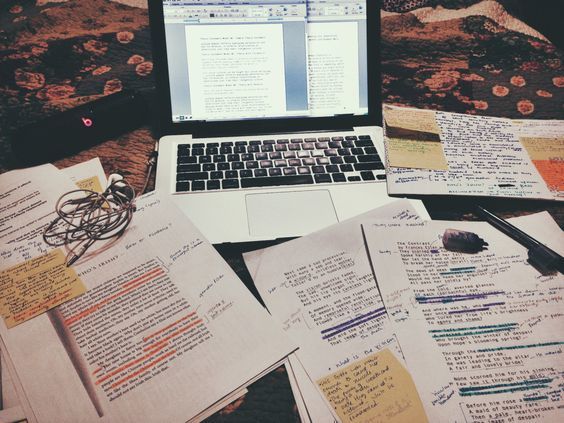 I didn’t know much about writing before I started the novel. My previous experience came from writing a story with my best friend in third grade about two characters (who, totally coincidentally, closely resembled my friend and me) who got stranded on a desert island. We added bits and pieces to the story on play dates, during recess, and during designated research sessions at the library, but eventually dropped the story. So the novel I finally started a few years later in fifth grade was my formal introduction to the world of writing: a world full of character sheets, plot arcs, and planning.

Encouraged in large part by Pinterest, I set out to research writing techniques, creating a board of writing tips that would eventually grow to over 500 pins. I learned the difference between showing and telling in writing (showing, surprisingly, isn’t always the way to go). I learned about dialog tags and the infamous “said” – contrary to what my middle school English teachers preached, “said” sometimes refers to the somewhat flowery dialog tags in Wattpad fanfiction. I learned how to set up motivations and character conflicts, and how to write scenes effectively.

It certainly didn’t happen overnight, but through both research and simple trial and error, I became a better writer.

Plus, thanks to all the copying from notebooks to Google Docs, I finally learned to type on a keyboard without looking at my fingers, much to my dad’s relief.

I learned constancy and patience

Writing a novel is hard work, obviously – it requires careful planning and thought, as well as dedicated space and time for daily writing. More than anything, it requires setting a goal and, however difficult, sticking to it. This novel was one of the first big projects of my life, and as such, I quickly learned the importance of focus. It didn’t matter what after-school TV shows I loved to watch or my nagging little brother (or my pile of homework), because I had a daily word count goal to hit. I cleared my mind of distractions, scrolled to the last page of my novel’s Google Doc, and wrote.

It was always difficult, but I persevered, even when it seemed pointless.

About halfway through sixth grade, a little over a year after starting the novel, I made the decision to completely restart. Inwardly frightened by the melodramatic beginning my fifth-grade self had written, I started a new Google Doc and rewrote the first two chapters and many other scenes scattered throughout the draft. I renamed one or two characters and added new ones. I pulled an old bulletin board of school projects out from behind my desk, turned it upside down, and used the back for a gigantic plot diagram, which I carefully added at night to the floor of my room.

Taking what I had spent a year writing and starting over felt like torture, but I knew I had to. I knew the other option to switch to a completely new novel – and I tried. As sixth grade progressed to seventh, I found myself bored with the book. I wanted it to end, so I took a step back and started a new project about something else. When I got fed up, I went back to my novel and the hundred pages of scenes and brainstorming. It felt like home. Reinvigorated by this new beginning, I plunged back into writing.

My friends and I got closer

I already had an amazing group of friends when I started my book, but thanks to our shared interests in writing, we grew so much closer. While writing the book became a big part of who I was in college, my friends stuck with me. They read over my scribbled scene snippets and cheered me on for more. They supported me when, to my embarrassment, my seventh grade social studies teacher took my notebook during class and read an excerpt from a romantic scene I had written and commented on it. in front of the whole class. I added a few to the main Google document, and they tirelessly added comments and edits to the two hundred or more pages.

Even during the summers spent apart, even in different countries since my family moved to the United Arab Emirates for a few months because of my father’s work, my friends and I kept in constant contact through writing projects. Many of them have started writing their own projects and sharing them with me via Google Drive. We started writing a script. Several joined me in NaNoWriMo a year – a group of us met at Panera one day after school for a writing session.

Now, with all of us in high school, I’m still friends with a lot of my college friends. And while I won’t give my book credit for it – credit goes to my friends, for being such amazing people – I will say that many of us are still writing today, many years later.

I found a hobby that would fuel my high school passions

As eighth grade began to wind down and my friends and I began to prepare for high school, my work on the book began to slow down. I still loved writing, but something had started to change. The dystopian world I created in my book didn’t hold as much interest for me anymore, and I started wanting to move on to other projects – for real, this time. As I entered ninth grade and a new high school without any of my middle school friends, I left my book, unfinished and unpublished, in a folder on my computer. The two hundred pages of it.

Yet my passion for writing remained. And as I went through my high school’s long list of clubs and extracurricular activities, I kept that in mind.

A few months later, I applied to be part of my school’s newspaper team. For me, it was a leap of faith: my first journey into non-fiction writing.

Today, more than two years after submitting my application, I can say that I am happy to have taken the plunge: I am now the co-editor-in-chief of my school newspaper, and I could not be more happy with the type of writing I do now.

Of course, in the end I didn’t finish the book. But writing it was a big part of my college years and my growth as a person, and it got me to where I am now. For that, I am more than grateful.

What to read in May